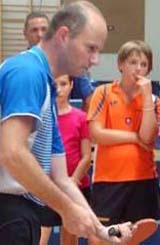 Organised by the European Table Tennis Union in conjunction with the ITTF Development Programme, Kiskunfelegyhaza was the home for a Eurokids Talent Identification Training Camp from Sunday 7th to Monday 13th August 2011.

Venue for the whole schedule was the Kiskunfelegyhaza Table Tennis Club; the town being just over 100 kilometres south west of the Hungarian capital city of Budapest.

It is a club that in the past competed in the Europe Club Cup of Champions, the forerunner of the present day European Champions League.

The guiding hand in those days was Ferenc Karsai, now the Club President and for many years the Austrian National Coach.

Strong Link
Furthermore, there was a strong link with Austria for the Talent Identification Camp.

Head Coach for the week, which was conducted under the 밒nvesting in Our Youth� concept, was Germany뭩 Richard Prause, currently one of the principal coaches at the Werner Schlager Academy in the Austrian capital city of Vienna.

Co-ordination
Matters were co-ordinated by Lila de Soysa with each National Association within the European Table Tennis Union invited to send two boys and two girls born in 1998 or 1999.

Furthermore, two coaches per National Association were invited to attend with the recommendation that one male and one female coach was nominated.

Girls Level Needs to Rise
On the whole, Richard Prause was delighted with the response of the players but he did feel the girls did not match the boys.

밒 think that federations should concentrate on special programmes for girls to increase the level�, he said. 밯e have the same problem with the top women players and we have to start building up with young girls and maybe the Eurokids programme is a good place to start.�

Gaps
In the female world of table tennis there are several gaps.

China leads the field, then there is a gap to Asia, then one to Europe and then to the rest of the world.

Are the gaps closing? I would suggest not the first two but Europe and the rest.

Certainly the young ladies from Egypt, notably Dina Meshref and Nadeen El-Dawlatly have made an impact on the ITTF Junior Circuit.

Next Step
밫he next step for this age group should be premium camps with the best boys and girls in a centre with the possibility to watch how the top players practise�, added Richard Prause. 밡ot only how they play at tournaments but how they practise.�

Exchange Beneficial
Exchanges ideas is always beneficial; encouraging people to talk to each other and not about each other is the way to make progress.

밒t was a good camp with good conditions; I hope federations will send players to these camps in the future�, continued Szilivia Kahn. 밊or the children it뭩 important to know the best players in their age group and to be able to practise with them.�

United Approach
Certainly, that is true for Europe, a continent of predominantly small countries in terms of geography; the more united the more chance of success.

A very worthwhile Training Camp with a tournament brining matters to a conclusion.

Swedes in Form
밫he first day of competition was intense but the final moments were thrilling; the level of play, in particular of the boys, was very high and some excellent talent was to be seen�, said Lila de Soysa. 밃fter a marathon competition Sweden뭩 Adam Blomquist clinched the honours in the boys� event against his friend and compatriot Omid Khoshbakht.�

They are the respective top two ranked boys in Sweden.

Parent Coach Pleased
Lila de Soysa was delighted with the Training Camp and with the attitude of the players as was Adam Blomquist, the father and coach of Peter Blomqvist.

밒t was a very good experience; I received very good advice from the Hungarian coaches who were very helpful�, he said. 밫he training was good and the final matches were quite hard but every match against a new player is good for them, from a cultural point of view it was also a very interesting experience; we would like to take part in European camps like this in the future.�

Girls� Final
Meanwhile, the girls� final was between Simay Kulakceken from Turkey and Dzhesika Zlatilova from Austria.

밪imay is already the winner of several Eurokids tournaments and once again remained unbeaten in Kiskunfelegyhaza; it was Dhezsika뭩 first appearance at a Eurokids camp and her talent is unmistakable, she was beaten only by Simay�, explained Lila de Soysa. 밨enata Varga of Hungary was placed third.�

The podium for the Girls Singles event in Kiskunfelegyhaza

Distinguished Guest
Furthermore, there was a very distinguished guest on duty for the presentations

밫he awards were made by European table tennis legend Istvan Jonyer�, added Lila de Soysa. 밒n addition the Deputy Vice Mayor of Kiskunfelegyhaza also attended the awards ceremony together with the Manger of the Unicredit Bank, sponsor of the event.�

밫hey were handed out for excellent attitude during difficult situations during the tournament to Jac Jenkins of Wales and Dalma Szabo from Hungary�, continued Lila de Soysa. 밫he youngest participants in the tournament, Michael Weis from Austria and Camille-Chlo� Linke from Switzerland also received awards.�

A talented group in Kiskunfelegyhaza with Tamas Lakatos and Szilivia Kahn